After first appearing in the 1940s, the candy’s iconic branding and edible rice paper wrapping gave it a special place in China’s collective memory and history. They are now exported to more than 40 countries worldwide. And if you haven’t tried it, maybe you should.

White Rabbit Creamy Candy (大白兔奶糖) is a brand of milk candy manufactured by Shanghai Guan Sheng Yuan Food, Ltd in China. White Rabbit Creamy Candy is white, with a soft, chewy texture, and is formed into cylinders approximately 3 cm long and 1 cm in diameter, similar to contemporary western nougat or taffy. Each candy is wrapped in a printed waxed paper wrapper, but within this, the sticky candies are again wrapped in a thin edible paper-like wrapping made from sticky rice. The rice wrapping layer is meant to be eaten along with the rest of the candy and can be found in the list of ingredients in the UK as “Edible Glutinous Rice Paper” along with liquid maltose, white granulated sugar, whole milk powder, butter, food additives, corn starch, syrup, cane sugar and milk. Each candy contains 20 calories for those of you who are weight watchers.

White Rabbit sweets have been advertised with the slogan, “Seven White Rabbit candies is equivalent to one cup of milk” and positioned as a nutritional product in addition to being a sweet. The candies hence accompanied the growth of a generation. Former students of the early Deng Xiaoping era in China (1978 to the early 1990s), have been reported to have taken this slogan literally and made ‘hot milk’ in their dormitory cooking rings by dissolving the candies in a pan of hot water.

In addition to the original vanilla flavour, new flavours such as chocolate, coffee, toffee, peanut, maize, coconut, lychee, strawberry, mango, red bean, yogurt, matcha, and fruit have been added. The butter-plum flavour, characteristic of China, was also among the new flavours added through the years.

White Rabbit Creamy Candy originated at the ABC Candy Factory of Shanghai in 1943, when a merchant from ABC tried a milk candy from England and thought that the taste of the candy was not bad. After half a year of development, he then manufactured the factory’s own brand of milk candies.

The first ABC milk candies were packaged using a red Mickey Mouse drawing on the label, and were named ABC Mickey Mouse Sweets. As their prices were lower than imported products, they became widely popular among the people.

In the 1950s, ABC became state-owned during the revolution. Mickey Mouse was seen as a symbol for worshiping foreign countries, so the packaging was redesigned to feature a naturalistically-drawn White Rabbit and an artist’s paint palette with Chinese and English hand-lettering in a color scheme of red, blue and black against a white background. The result was a distinctive candy label design that became instantly recognizable around the world.

The packaging and brand logo have changed over the years: When the candies were first marketed, the White Rabbit on the outer packaging was lying down; however, this was changed to an image of the rabbit jumping. Currently, the trade mark animal on the outer packaging has been given enormous neotenic, forward-facing eyes in the style of Disney or Japanese anime, while the inner wrapping retains its classic art deco look and naturalistic rabbit.

Initially, production of the candies was capped at 800 kg per day, and they were manually produced. In 1959, these candies were given as gifts for the tenth National Day of the China. In 1972, Premier Zhou Enlai used White Rabbit candies as a gift to American president Richard Nixon when the latter visited China. Today White Rabbit candies are China’s top brand of sweet.

Although the White Rabbit brand already had some history, its popularity worldwide has grown with the economy of China. Cities and agricultural villages’ demands are increasing, especially during the Chinese New Year period, when many families provide White Rabbit sweets among other candies for visitors.

But as Chinese consumers and tastes change, White Rabbit has found itself competing for attention in a busy and cosmopolitan market. Many imported sweets can now be seen on the shelves of Shanghai’s supermarkets and convenience stores, and the iconic rabbits have struggled to keep market share, leading the company to diversify its products.

Increasingly health-conscious consumers in China are also shifting away from too much sugar in their diets, particularly for their children. While the sweet was once thought to be a healthy option because it contained milk, parents are now better informed now about the health implications of sugar.

When more than 52,000 children were made ill by melamine-tainted dairy products in China, White Rabbit was listed among the many milk-based food products that were found to be contaminated with the chemical compound. British supermarket chain Tesco removed White Rabbit sweets from its stores, while food authorities in Australia, the US and Singapore issued cautions or recalls over the product. All this affected the brand’s reputation and sales.

Undeterred, the brand has been mounting a comeback during the past decade. White Rabbit now only uses imported milk powder from New Zealand to reassure consumers. In a bid to compete with imported brands, the company has introduced a variety of new flavours, including chocolate, peanut, red bean and yogurt. There are now more than 30 products in the White Rabbit brand line – although the classic flavour remains the bestselling sweet.

As these retro sweets forge into new markets, new consumer groups and new tastes, balancing tradition and modernity will be the key challenge. After putting White Rabbit candy into ice cream, bubble tea and even coffee, you’d think people would eventually grow tired of the milky sweet – well, apparently not.

In the latest of strange collaborations, the White Rabbit candy brand has partnered Chinese fragrance and perfume store Scent Library to launch a new line of beauty products ranging from perfumes to body lotion. So looks like the brand intends to grow through a product extension. Will it work? Let’s keep an eye on the rabbit. 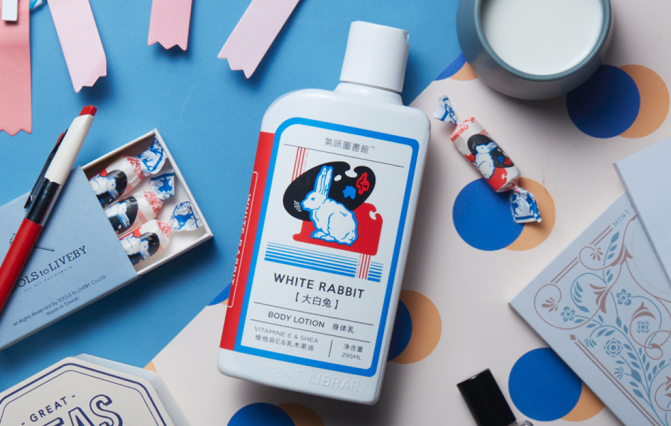 Check out my related post: Have you seen Miniso?

Always thinking about new ideas and ways of doing things. Passionate about creativity and dogged determination. Improve the world by improving yourself. Connect the dots and build value. View all posts by abetterman21

8 thoughts on “Have you tried White Rabbit Candy?”

({[the saturnic deconstruction of the ego]})

Adventuring, Exploring and Discovering with all its Nations Beauty, lifestyles, and Cultures.

Where a little insanity goes a long way