How did the turntable come about?

Through the years, on occasion, recording industry experts have sounded the death knell for the turntable. All have been proven wrong. Despite countless threats to the vinyl format—whether it be commercial radio, cassette tapes, compact discs or mp3’s—LPs and the machines that play them have not only survived, but often thrived. Audiophiles swear by the unparalleled fidelity of vinyl, and in recent decades, club disc jockeys and hip-hop artists have transformed the turntable into a musical instrument in its own right.

Vinyl record player history dates back to 1877, when Thomas Edison announced his invention of a device that would record and replay sound. The phonograph, as it was called, functioned by inscribing and retrieving audio information on a sheet of heavy tin foil wrapped around a cardboard cylinder. Three years later, Alexander Graham Bell improved that technology with the development of the graphophone, a device that retained Edison’s cylinder but used wax instead of tin foil as the recording medium. Both devices were marketed in the late 1800s—often as office dictation machines or as coin-operated record players stationed in public arcades.

The first turntable as we know it arrived in 1895, when German-born American immigrant Emile Berliner introduced a commercial version of a record player he had been developing for seven years. Utilizing a flat disc instead of a cylinder, the gramophone, as it was called, garnered wide public acclaim. Unlike Edison’s cylinders, gramophone records—made first from hard rubber, then from shellac, and later from vinyl—could easily be mass produced. As a result, the gramophone dominated the consumer market, with companies such as the Victor Talking Machine Company marketing “Victrolas” to the public.

Here are some of my favourite ones mostly the portable types. And if you are into collecting, hop on to eBay or your local thrift store your hands on these vintage pieces. 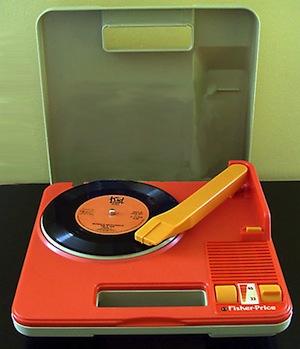 My mom bought me one of these when I was younger. Probably gave me a kick start in vinyl records. 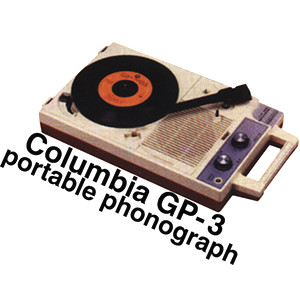 A friend had one and we listened to hours on this thing. Believe or not, we were the IN crowd then!

Depending on what part of the world these were originally sold in, they’ll either be called the Soundburger or the Mister Disc. They were expensive when they first came out in the early 1980s but interestingly, the market for these have come down quite a bit since the days where finding any working model under $300 was a steal.My personal favourite due to the design and ingenuity.

Check out my previous related posts:

Are vinyl records worth collecting?